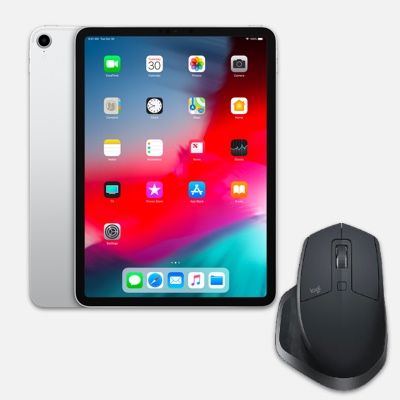 Since Apple isn’t offering a mouse, here are three non-jailbreak workarounds you can use.

Apple’s iPad has come a long way since it was first introduced six years ago in 2012. The first-generation iPad was a remarkable device; it featured a mobile touch screen with a 9.7-inch display and ran the same operating system as the well-loved iPhone. For the time, it was an iPhone on steroids. A device that allowed users to enjoy everything they loved about the iPhone in literally a bigger way, opening the door to new and exciting uses.

Six years later, as competition grew stronger in the tablet world, so did Apple’s design of the iPad. Today, the device has grown systematically both in capability, quality and in size. The line even spawned a bigger brother, the iPad Pro, which is offered in a 10.5-inch display screen model and a 12.9-inch display model.

Apple touts the iPad Pro as “more powerful than most PC laptops” with the “most advanced display on the planet.” And it’s hard to argue with their description. The iPad Pro is a powerful, elegant device that gives users even more options with its bigger display, making it a potential replacement for a laptop.

However, one glaring detail is still missing on the latest versions of the iPad Pro – the ability to connect a mouse. This may seem like a minor omission, but it’s a difficult compromise for power users. If the iPad Pro is being touted as a replacement for a PC laptop, then shouldn’t it be able to do what a PC laptop does plus more?

With Apple’s legendary link to the video editing and graphics fields, plenty of professionals would love to use the iPad Pro for these tasks. But doing so without a mouse can be quite tedious, laborious and beyond frustrating.

The fact that Apple doesn’t offer mouse capability seems to run counter to everything else it’s doing with the iPad Pro. It offers the ability to either connect a third-party keyboard or one of Apple’s own keyboards to the iPad Pro... but that capability is missing for a mouse, or even a trackpad.

Navigating on the iPad Pro is taxing without a mouse. Picture lifting your hand up continually to scroll on the screen as you type and switch between apps. If Apple is already offering keyboard connectivity to the iPad Pro, it should similarly recognize the need to offer mouse capability. Otherwise it’s making a lukewarm attempt to be a true replacement for a PC laptop.

So why wouldn’t Apple offer mouse capability with the latest versions of the iPad Pro? Well, there are a few reasons actually.

Apple has long been known as a company that doesn’t want you to get anything outside of its product ecosystem. The late Steve Jobs and his team of programmers and designers were famous for wanting to have control of every aspect of every piece of hardware they created. This allowed them to produce devices of astounding quality, and the Apple of today still follows this principle… only to a fault. This is just one reason they don’t support third-party devices or software, and why it’s hard to customize Apple products. For better or worse, Apple likes to control the user experience.

In addition, by not offering a mouse for the latest models of the iPad Pro, Apple also keeps open the possibility of rolling out a new product line, and new revenue stream, at a later time. Remember when Apple removed the standard headphone jack from all its phones starting with the iPhone 7?

Think of the mouse in those terms. Apple removed the headphone jack from iPhones and replaced it with the Lightning connectivity, forcing people to use its own EarPods that use a Lightning cord. So just because Apple doesn’t offer mouse connectivity now doesn’t mean it won’t roll out that feature, slowly but surely, in the future as a way to make more money.

In addition, there’s some validity to the argument that if Apple offered mouse capability on the iPad Pro, the device could serve as a potential replacement to its own line of MacBooks. Why purchase a MacBook that is bigger and heavier than an iPad Pro and starts at $1,299 if you can get close to the same functionality in an iPad Pro for only $799? The argument against cannibalizing their own line seems to hold some weight.

For now, Apple pushes its Apple Pencil as a replacement to the mouse for the iPad Pro. It’s a digital stylus that allows you to take notes, markup emails and words on other documents, like the iPad Pro is an actual notepad.

There is actually some science behind using the Apple Pencil instead of a mouse. In a study of students in three different experiments, researchers Pam Mueller and Daniel Oppenheimer found “that students who write out their notes on paper actually learn more.” So is Apple concerned with the education and development of all its iPad Pro users? Perhaps. Or maybe they’re fans of the fact that the Apple Pencil is a proprietary device people have to buy from them to use. Or… like the aforementioned headphone jack, maybe they just think the mouse is a device of the past.

Whatever the actual reason, the fact remains that many users would love to have the capability to use a mouse with the latest versions of the iPad Pro. But since Apple doesn’t offer mouse capability, are there any workarounds available? The answer, thankfully, is yes. The best part is, these aren’t potentially dangerous “jailbreak” work-arounds.

Here are some non jailbreak methods for connecting a mouse to the latest version of the iPad Pro.

You can connect a mouse and other peripherals to your iPad Pro by purchasing a DoBox. It’s a mini peripheral portal which connects to the iPad Pro wirelessly. In addition to the two USB ports, the DoBox has an HDMI port, internal storage, a micro SDHC memory card reader and a built-in battery to charge any of your devices through one of the USB ports.

Using a DoBox can easily allow you to connect a mouse to your iPad Pro so that you can have the functionality you need without doing any iffy jailbreaks on your device.

So how does it work? Click here to see a video demonstration. It’s pretty simple.

Jump Desktop is a remote desktop client that allows you to connect to any computer in the world. It even allows you to use Mac shortcut keys on Windows, to avoid that annoying switch back and forth between the two sets of shortcuts.

The great first step to using Jump Desktop is that it supports a trackpad mode, which at least gives users the option of not having to use the iPad Pro’s touch screen for navigation. The next step in the process is buying the X1 mouse, which is the companion hardware for the Citrix Receiver, which has an iOS client. So connect the mouse to the receiver, and you’ll be able to freely use a mouse with your iPad Pro through Jump Desktop.

The steps are simple:

This method is perhaps the simplest of them all, but unfortunately, it’s only for older iPad models at this time (not the iPad Pro). Through this method, you buy a Lightning to USB cable. They’re available on Amazon for as little as $12.99.

Once you have the connector, connect the Lightning cable end into the bottom of your iPad, just like it was a charger, and connect the USB cable end to your mouse.

And just like that, if you own you’ll be able to use your mouse with the iPad.

This method has a few advantages. It’s cheap, it’s easy and it’s quick and painless without having to download any apps or software. But so far, it only works with iPads up to the fourth generation, through 2016. So you’re still out of luck if you have the iPad Pro.

Dear Apple, it’s not you it’s… actually it’s you, give us a mouse for the iPad Pro!

We covered a few methods that will allow you to connect a mouse to an iPad Pro without jailbreaking your device, or even a standard iPad if you lack the former. These are band aid fixes, but better than nothing perhaps.

But what we really want to see is for Apple to step it up. The Apple we know and love is innovative, on the cutting edge, and represents the pinnacle of quality, user design and usability. The users have spoken… Apple needs to come out with their own, integrated solution so that iPad Pro users can use a mouse with their device without having to find third party workarounds.

Apple, if you’re out there, this really isn’t working. We love the latest iPad Pro… from design to portability, we want it to be a PC laptop replacement.

We need a mouse with the iPad Pro, Apple. Is this too much to ask? We think not.